“Serena is not doing enough to support the women’s tennis tour because she plays in so few tournaments.”

That was it, the micro-aggression that tipped my anger into rage, the pot that is always on a low boil no matter how many breaths I count or my joy in watching her play.

Tennis is my game. The Australian Open is in full swing and the Williams sisters are doing very well. I was watching Serena’s second round match. As she warmed up, the two Aussie announcers, both women, had this dialogue: “What do you make of the outfit, Luce? It’s kind of a warriors outfit, I’m not sure…” Luce answers: “To me it looks kind of like a piano from the back.” Chuckle, chuckle. Nevermind that many of the players are sporting black and white designs on their outfits. It is a sideways comment about her big, beautiful body and how uncomfortable they are with her.

Later in the match, one of them remarks: “That noise she is making is a distraction.” Hilarious. Truly. Ridiculous.There are so many women who make loud noises on every hit and just one loudish noise from Serena is problematic. I breathe and keep cheering her on from my couch, periodically clapping and saying: “Let’s go!”

After watching a ball hit close to the baseline, Serena raises her finger to challenge the call. The announcer says: “That ball looked good – I think she is not certain about this challenge.”

Lo and behold, Serena’s instincts are right – the ball was out. Again, the announcer cannot stop her unconscious language choices and says: “She gets away with it.” What did she get away with? Serena was correct to challenge the call. In fact, she and Venus are known for rarely challenging calls and being almost always right when they do.

As Serena slowly wins points and is one away from winning the match, the other player is serving. “It would be ideal for Serena to serve out the match.”

Anyone who plays tennis knows that what is ideal is to win the point regardless of who is serving. In fact, it is a key skill to break your opponent’s serve and win the point. In an Open when you must play and win seven matches against progressively stronger opponents, what is ideal for Serena is to win sooner than later and get off the court to rest. It is unclear who this ideal scenario they spout serves.  When her opponent does win the point, the announcer’s comment is: “Safarova forced her to serve out the match.” What another interesting word choice. Especially when Serena won most of the points of the match. It is a tired attempt to build up Serena’s mostly white opponents and shrink her dominance in tennis. As a creative writer, I truly cannot match the word choices that come out of these announcers today. 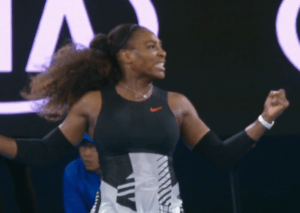 Serena, as she serves out the match, is said to have “some extra venom” and “who knows what is bubbling inside of her”. For others that would be called grit or determination.

They don’t say directly why they think Serena not playing in more tournaments equals not supporting the tour. I imagine her star power would bring out more fans, and I agree I would be far more willing to pay for the expensive tickets to see her or Venus. However, Serena does her fair share and more for the tour when she does play and even when she doesn’t. She and Venus have been role models that have increased the level of play across the board and resulted in a new crop of racially diverse US female tennis players.

In just this one match, she tolerated the ignorance of announcers who picked on her clothes, her noises, her call challenges, and her ‘venom’. She must, like all women of color, take breaks from a racist, sexist society to recuperate and rekindle her patience. Otherwise she is, yes, an angry black woman. They keep wanting her to act as if the world is fair to her and therefore she should be grateful and set her needs aside.

In fact, because she takes care of herself, she had the confidence and courage to call out a reporter in a media interview later for diminishing her play: 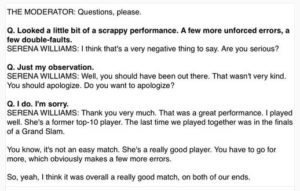 Women of color do get weary because life is not an easy match. We must be good with a few more errors and alot more self-care so we can claim our truth, as she did, when it was not given to her. To say she doesn’t support the tour enough is the wrong statement. The accurate one is that the tour does not support her enough. While many women marched around the world for justice and equity, she marches out onto the big stage again and again with a deep breath, showing us all how to be great despite the endless micro-aggressions that are slung our way.
#52essays2017 #GOAT