I never bring it up myself. Typically someone will ask me how long I’ve lived in the bay area. I say, “I have been here for over 25 years now.” If I’m feeling frisky or if I like the person and feel comfortable, I may add, “I originally came up for school in my twenties.”

“Oh, really. Did you go to Berkeley?” I have my ideas about why they always pick Berkeley. There is the notion that my politics are to the severe left, which matches up with Berkeley’s reputation. There is also the notion that I lived in Berkeley for 20 years. And, finally, there is the belief that if I went to Stanford, I would have said it from the beginning.

“Nooo,” I say with the lowest key, humblest voice I can muster. If I were more stoic, I would then just stay quiet and dare them to pursue their curiosity. But I’m not. I was raised to tell the truth and answer questions before they are even asked. The problem with answering this question, what always makes this an unsatisfactory interchange, is that people stop wanting the truth after I answer. 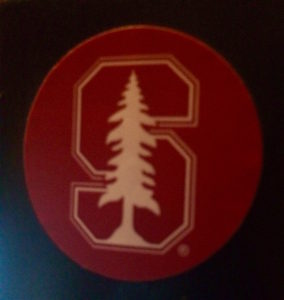 “I went to Stanford.”

What is the appropriate response to that? What does this mean if I had said yes to going to Berkeley or any number of fine schools full of smart people? What about all the clever people who did not spend a day on a college or even a high school campus? And was I not smart before they learned I went to Stanford?

Like I said, they stop wanting to hear the truth at that point. They don’t want to know that I am indeed smart, but not because of Stanford. That I was sure I was smart when I transferred to Stanford from La Verne. That by the time I graduated from Stanford after attending on again, off again for five years (remembering I already had one year under my belt), I thought I must have been mistaken about my intelligence. Certainly the library didn’t think much of me, having suspended my right to check out books forever by the time I left. Funny what happens when you don’t have the money to buy the books and you check them out and lose track of when they were due as you seek to at least keep the Jones within earshot.

My Oceans professor would not have given me much of a recommendation, seeing my name next to the lowest score on the mid-term. I was smart enough to switch to pass/fail to avoid a D- on my transcript. My English literature professor would recall how I almost fell asleep in his seminar room with only five other students present. How he sent me out to get a cup of coffee. He didn’t worry about my achievement. Perhaps it fed the stereotype he had heard that Latinx don’t value education. My Spanish literature professor would recall how I dropped his class the day I was scheduled to make a presentation. I was a Latina for god’s sake, utterly shamed when I couldn’t handle this class, did not know how to dissect literature and, more than anything, did not know that professors’ office hours were for me.

And don’t think my statistics professor could explain my fall from grace. Getting an A- on my mid-term and a D on my final. He would look puzzled, presuming I was lazy or in love; trying to remember when was the last time a student wrote an apology at the end of her little blue finals test book. Even my friend, who taught an alternative class on Oral History, would wonder about my ability to follow through, given she had to give me an ‘incomplete’ on my transcript that is still there. To complete the course would have required me to interview my father, and I was caught in the ‘don’t ask me questions’ message he telegraphed as I interviewed my mother. He would have had to lie about his first family when I asked about why he came to the United States.

Because people who discover I graduated from Stanford think I am so smart, they don’t want to hear that I finally decided I was a better fit for UC Santa Cruz, but I was too close to finishing and could not bear another transfer process. I scanned the majors in the English department, finally settling on Creative Writing, knowing sin duda I could write nine short stories. No other major seemed doable for me to graduate. People have told me that writing nine stories would have terrified them. I was touching the tip of my gift como escritora, but no one thought to tell me it was a gift and I didn’t see it. It was fed by the many white, mostly male professors whose canon of literature did not feature writers or protagonists that reflected me. I had one professor of color, Sandra Drake. She chose to read my story first in her Creative Writing class. I felt uncharacteristically proud, but my soil of self value was too dry to absorb what she did. I see now that she was in my corner, but I was in my assimilation and survival phase.

Because everyone thought I was smart back when I attended Stanford, including my fellow students, roommates, and my family, I did not see help as an option. I had no idea how to break the news to myself or others that I was in a foreign land where people spoke a foreign language and did not understand the impact of race, gender, or class. Help was all around me, from my advisors to my work-study oficina full of radical women who saw my differences as positive but did not know my terror.

I did graduate, wearing my sister’s graduation gown and hand-me-down shoes along with a banner protesting Estelle Freedman’s initial tenure denial, happily overturned a year and a half later. It did not have to be this way, but I had not yet embraced the privilege I had. My parents would have given me money for the books, but I had inherited their “do it yourself” attitude. At the time they had three children in college and that must have lurked in the back of my mind.

More importantly, I wanted to be able to take care of myself. My wings had always been spread too wide for the circumstances of my life. I kept flying off buildings that were too tall and crashing. This verve matured into my capacity for vision and for imagining a world bigger than my daily struggles. People will continue to fall into the habit of framing intelligence by external factors rather than by the myriad ways we are all magnificent. No matter. I am comfortable with my lessons and the journey that brought me to this moment. The stock storyline about my intelligence quotient is just one of many misinterpretations that stop people from holding the complexity of my being. It is up to me to guard that gate with my heart, and I do. #52essays2017