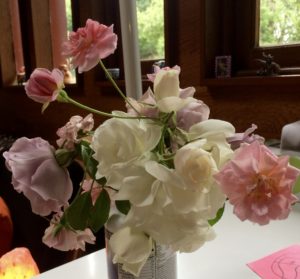 My heart has been heavy this week. I thought the goblins and ghouls that sneak into my thoughts more easily near the full moon were poking me into this ‘hot loneliness’. Then, at the Chill and Still yoga class, I quieted down enough to understand it was Mother Loss, awakened by Mother’s Day. June marks fourteen years since my mother passed on to her next realm. I had not been thinking about her, which is why I missed the deeper source of my grief and malaise.

Instead, my thoughts had been on two friends and mothers who passed away within months of my father’s death in 1996. This remembrance was sparked by seeing two rose bushes I planted, one for each, in full bloom. I carefully cut some sprigs to mix in a bouquet — honoring them and mi Mamy Isabel, who doted on her rosas. 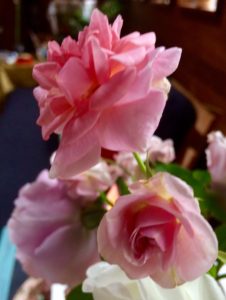 Meg died first, the cancer that had stalked her for a few years finally snaking into her brain one month after attending my father’s funeral. She had desired motherhood for many years and finally adopted Natalie, who was about seven years old, a rambunctious girl who must be in her early forties now. I hope she has the same spirited approach to life that stretched Meg’s reticent personality to its limits and beyond. Natalie lost two moms and I wonder if she feels the heaviness I do around this time of year. Meg sent me a card many years ago with a quote by Adrienne Rich that nestles in one of my drawer:

These words she gifted me have set a high bar in my life and I don’t regret that. I am even more honored she read these words and thought of me. It gave value to a word used too easily and with no thought of its amazing power. Love is a verb and this quote has reminded me of that through the years thanks to Meg. She is nodding quietly at this, a slight smile playing on her face. She was one of very few white friends over the years who did not decide one day, with no dialogue or clear explanation, to unfriend me before that became a thing on FaceBook. She went that hard way with me. 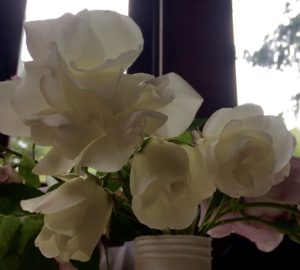 Willa was a force of power and grace who I met at Alameda County Child Protective Services. Her nails were long and her heart was as wide as the Pacific Ocean. After losing her first husband, she had found love again and her son joined an older daughter. Willa died because of the elitism system of health care when the Richmond Kaiser “standby” emergency room was not equipped to deal with her life-threatening illness, a classic case of structural racism. This poem emerged while in my MFA program.

Willa, Willa, Willa
You died too young
left your children too young
your oldest daughter an orphan
her father a Jonestown casualty

greedy, racist economics killed you, Willa
heart that overflowed in kindness
black body that could not hold the pain
that ate your nerves as you drove that night
drained your adrenals down to empty

if the world loved your people

Willa, Willa, Willa
Your name means desire and protection
May your strength rain down upon us all

These three mothers made an indelible mark on my soul and on my mothering. My mother never used the word ‘love’, but that did not stop me from learning what I could from how she tended her garden and embracing love, amor, y cariño in my mothering. I take no day for granted with my twins, and am committed to doing justice to the complexity of motherhood.