“I don’t when, or where, or how, but I see a tattoo in your near future. Perhaps it will be the date of Javi’s death, or his birth, but you will sear his pain into your skin to keep his heart beating in yours. An acknowledgment that his life and his death are part of who you are. It is a full moon and he calls out to all of us across space and time. He reminds us of what is not yet done, what arms we must now take up, what sorrows we must now bear and what joys only we can express.”

I spoke that into my Notas de voz app in the middle of the night on August 7, 2017, a week and a day after my son’s best friend died of an accidental overdose of Xanax and alcohol at age 22. Three days after the full moon my son celebrated his 22nd birthday with many friends he had met through Javi, who had planned to be there in body, but only hovered in spirit.

Another question woke me a few nights later: How to stay present in the grief of the moment and not get tangled in the grief of the world or the grief of the past. Not an easy task ever. In Charlottesville, Susan Bro, the mother of Heather Heyer said: “Remember in your heart: If you’re not outraged, you’re not paying attention. And I want you to pay attention, find what’s wrong. Don’t ignore it. Don’t look the other way. You make it a point to look at it, and say to yourself, ‘What can I do to make a difference?’And that’s how you’re going to make my child’s death worthwhile. I’d rather have my child, but, by golly, if I got to give her up, we’re going to make it count.” 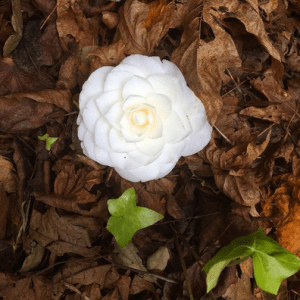 With my mother’s birthday on August 18th, the grief from the past entered the tattered muscles of my heart. Grief is always present if I pay attention, coming like a wave and triggering all the losses in my life, no matter how much I honored and felt them at the moment. There is no end, only a settling in with grief. That is why I mark dates on my calendar, why I keep reaching out to people who have suffered loss. Like tiny petals from a flower, grief falls into the moist soil of our corazones and slowly becomes one with our lives. Someone has the same accent or we use the same gesture of one who has left this earth and we wince with remembrance. My practice is to welcome the moments with a deep breath of love and gratitude for my life, for the opportunity to feel deeply, love deeply, and offer compassion to others living with grief.

I sat with my son for several days after Javi died, along with his twin sister, and witnessed his shattered heart. I set up an altar with a vela and some flowers. My son added an art piece painted by Javi and a bottle of his favorite alcohol. We said very little, offering him a wide meadow to empty tissue boxes, eat in little spurts, fall asleep with the lights and TV on, drink and sob and drink and sleep.

His wings dragged behind him, his breath stuck in his throat. He could only see a few feet ahead, his wish to fly unfettered with so much space he could close his eyes seemed impossible. He was so weary, so wanting to rest.

But ahora he can’t with his heart ripped to shreds, his guilt a noose around his neck, time too slow and too fast at the same time. How could it be a week already, how could the minutes pass so slowly. He dreads ahora, dreads going to sleep, dreads waking up and facing the same horrible reality. I can’t ease the pain that is a knee to his gut, a kick to his thigh, a punch breaking his jaw.

Al final, I cannot make this go away. Al final, al final, al final there is nothing to soothe Javi’s mom, nothing to say or do that changes death. Nothing to take away the knives of sorrow that pierce my son’s heart. Heavy already with David’s death last year and Javi’s now, fear grips him about who will be next. He might even wish sometimes it would be him so he doesn’t have to ever look inside a casket again at a friend’s still body. As for me, I wish these young men of color would egg on each other’s brilliance as much as they do their risk-taking with drugs and alcohol. But then I remember they were not meant to survive and they do their best in a world that does not honor their gifts except to appropriate them for profit. When I looked for news the day after his death, I saw that he was not the only young man of color that died that night in Oakland. RIP Javi. Que descanses. Que todos descansamos until the next wave washes over and reminds us we are never alone in our grief. #52essays2017